Fala Burnette recalls rescuing a beloved pet chicken in the first part of an article series chronicling the store of Wally the hen. 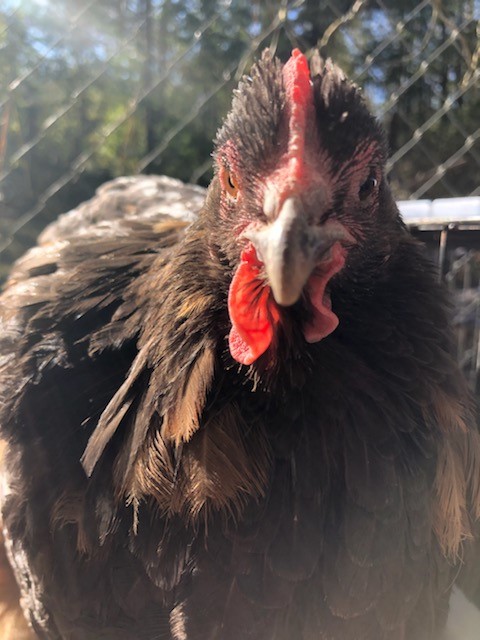 Learning about a Chicken in Need

September 4th 2020 started off as every normal shopping trip to town did, with a list in hand and a long trip in the vehicle to get to the nearest big market. I caught sight of something quite odd as we pulled into the parking lot, however, realizing that under a parked vehicle on this hot day stood a chicken. There were no nearby farms, and she was not the average white “broiler” bird that could have somehow escaped a truck headed to the plant. We vowed to try and rescue the chicken after the trip was done, if it was still there and no one who was nearby claimed it. As we exited the store, the bird was still under the vehicle by that point, and we parked in order to try and herd it up and catch it.

No Food, No Water

After speaking with some other folks in the area, they said the chicken had been there all morning and had no clue where it had come from. Upon closer inspection as we approached to try and find a way to catch the chicken, we realized it was a large hen with pale brownish feathers and a patch missing on her back. She was frantically trying to seek shade, panting and scared in the parking lot of the busiest store around, and there was no way we could leave this hen to chase moving vehicles in search of a cooler location with the chance to be hit by one. No food or water in sight as well, her overall condition was poor, and we believe she may have simply been abandoned here.

Help to Capture Her

An older lady parked her car after seeing our efforts, and this sweet soul offered a towel and helped us herd her around until my husband finally managed to catch her. She may never see this article, but I am grateful for a stranger’s kindness to help, while many others stood at a distance and watched us. Needless to say, “Wally” as she was so named in a nod to her rescue, found herself a forever home. My husband held our new rescue in his lap the whole way home, a fluffy hen too exhausted to put up a fuss. Little did we know, she would come to repair the hurt we had recently felt in losing one of our oldest rescue dogs, and our female duck. Four weeks to the day before her rescue, my oldest pup passed away, then two weeks to the day, we lost our hand-raised female Khaki Campbell. Wally just after her rescue, pale in color with poor feather quality and missing feathers.

After two weeks into her “quarantine” period, Wally had adjusted well to our care. She was familiar with the red-handled shovel I used to dig up worms for her as treats, and finally began to vocalize and approach the front of her enclosure when I brought them to her. She started to give excited little clucks to see you in the mornings and became familiar with her nighttime “beak rubs” every evening. The pale, frizzled feathers were still there, but the spot on her back had begun to heal well. We were stunned to see those feathers growing back a dark, chocolate brown that contrasted her reddish colored ones on the rest of her body. Wally’s feathers growing back in on her back, a contrasting chocolate brown.

Integration with the Flock

Slowly, integration into the flock came about, though the biggest hen we now had still was bullied no matter how many hiding spots she had or how slow the adjustment was. Was there a chance for her to befriend the lone Khaki duck, Tater, who had recently lost his companion? She accepted the change, as did Tater, and the two ended up enjoying one another’s company. Supervised interactions between the two saw her no longer being picked on as she had been by her fellow hens.

As I write this after Wally’s first 7 months at Wolf Branch Homestead have passed, I am happy to say that she is by far the friendliest chicken I’ve ever had the privilege of knowing. She molted the unhealthy, pale feathers, and grew in a soft and beautiful dark, chocolate feathering. Wally and Tater have been together the entire time, and are doing amazing together. Spoiled Wally likes to fly into your arms at night, having you carry her into the coop and put her on the perch. She still requires pets and tummy rubs before bed, and likes her beak rubbed just like she did after rescue. Stay tuned for more of Wally the rescue hen and Tater the duck’s adventure stories!

Watch Wally and her friend Tater

After graduating high school, Fala Burnette went from working part-time to full-time at an animal shelter, then continued to keep careers that dealt with animals. After she married her husband in December 2014, she left her job working as the kennel manager of a veterinary clinic. The couple moved to Ashland, Alabama to begin building a cabin on the land where her husband was raised.

Keeping Your Flock Safe During Winter


Thank you so much! Wally is still enjoying life with us after over a year since her rescue!


Thank you for the lovely story about Wally. She turned out so beautiful!
What loving care can do!
Best regards
Clara


Thank you Clara for your kind words! We love our sweet Wally, and can’t believe how far she has come. Stay tuned for more about her and Tater!