This month’s “Cool Coop” is an great example of repurposing. I imagine a lot of folks have sheds, forts or playhouses that have outlived their usefulness. With a little elbow grease and creativity that abandon structure could become a functional coop. I’ve seen examples of chicken coops made out of just about everything, but when I ran across this adorable setup on BackyardChickens.com  I couldn’t wait to add it to our list of Cool Coops!. Gina, from East Tennessee, graciously agreed to share her story and photos of how she transformed a plastic playhouse into a safe and attractive home for her flock. 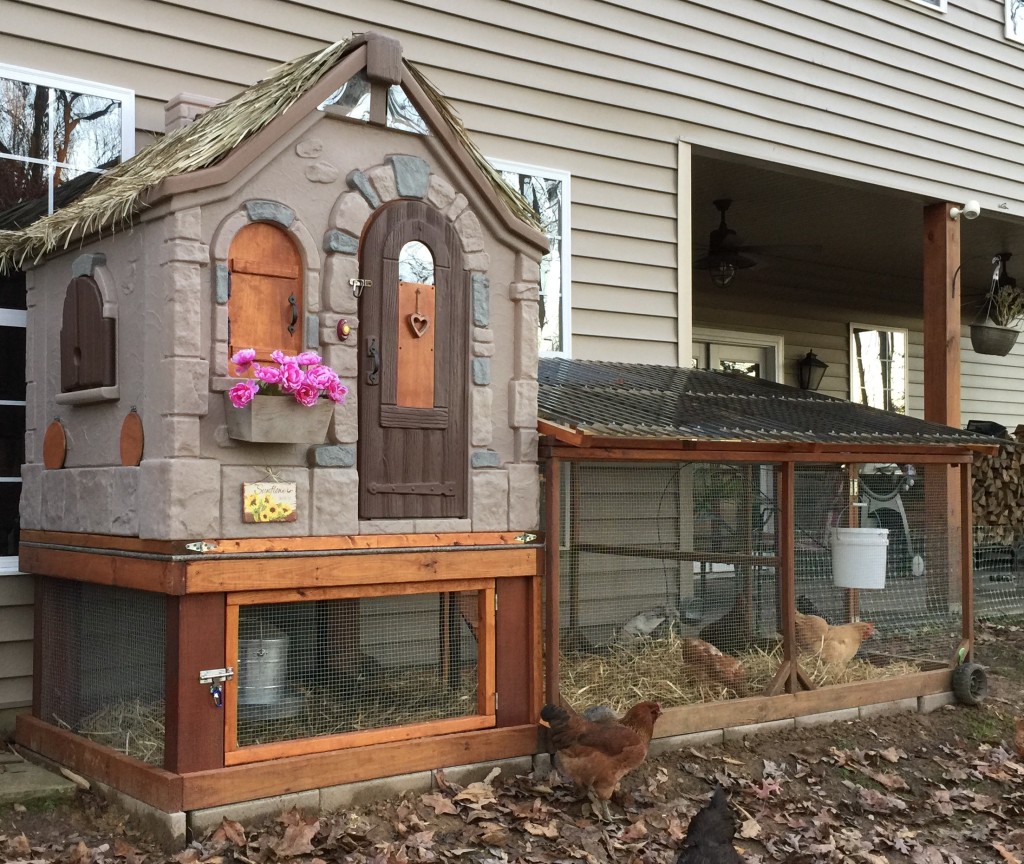 It rains a lot here in east TN, so I decided on a waterproof poly construction structure to avoid water damage and red mites infestation typical with wooden coops. Situated on the east facing side of the house for sun/draft protection. Painted and decorated for maximum charm, with real thatch on top. 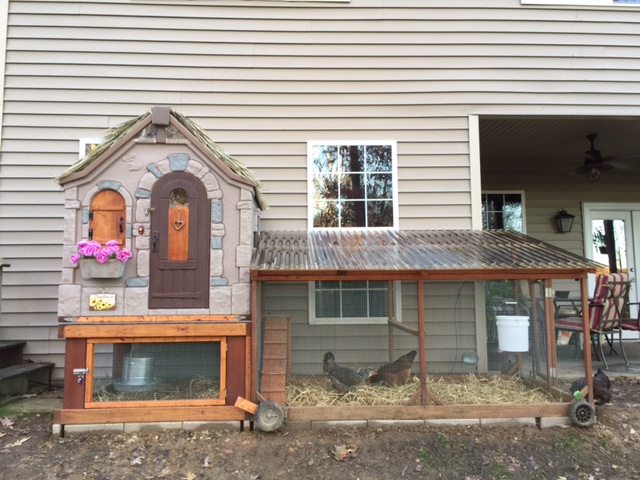 The below is the original playhouse. It’s called Naturally Playful Storybook Cottage.
The structure is strong enough for kids to climb on top, and sized at at 5.35′ x 4.58′ x 4.2′ My wooden coop with asphalt roofing started rotting within a year here at foothills of the Smoky Mountains, and my run was initially designed with flip top openings with a pretty canvas tarp on top.
It was cute, but a disaster… The tarp constantly pooled with rain water and snow accumulations without any roof pitch. Later added a wooden frame for enough angled pitch, but even super heavy duty 16-Mil thick $$$ tarps had to be regularly replaced with significant shrinkage after only a few months. Lessons learned!

The entire coop and run sit on top of 2 x 8 x 16″ paving stones buried deep in the ground. The wood frame sits on the 2″ side of the stones. This (along with hardware cloth) prevents mouse/rats digging into the run, helps to preserve the ground contact wood, and prevents water runoff into the run during hard rain. I didn’t even know I had a rat issue until I saw one caught on my security camera night recordings, happily living off the chicken feed. The rat was too smart to get caught on traps. – After the extended roof eaves and stones, I no longer have a muddy run nor rat problem.

Automatic watering with poultry nipples with a timer and a float valve. A 200-watt birdbath de-icer is added inside the bucket during winter. The poop boards have glued vinyl sheet base, and they’re made to be as lightweight as possible for easy handling, but as sturdy as possible so that they won’t budge even if the hens step or jump on them. Larger windows are paneled with Lexan. The polycarbonate panels are much stronger, offers better thermal insulation, and stays clearer longer than Plexiglass/acrylic. The very top openings are left open for ventilation, which are needed for ammonia fumes to escape and avoid humidity buildup that can cause frostbites during cold weather. Security cameras and wireless humidity/thermometer are added for remote monitoring.

Although it helps to neutralize ammonia fumes, I may later replace the sweet PDZ with simple vinyl cut sheets for poop scrape off since I’m noticing quite a bit of PDZ dust already, which is linked with mesothelioma. I currently wear organic vapor respirator mask while scooping, but I may get rid of poop boards altogether in the long run, depending on the pros/cons related to the maintenance frequency / ease. 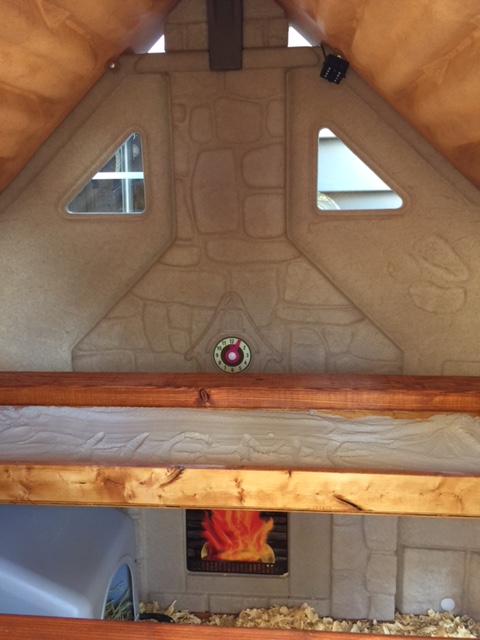 Although the roof thatch’s initial purpose was decorative, it made an unexpected difference in the coop insulation even with ventilation. Before adding the thatch, the coop’s inside temperature was only about 2-3 degrees higher than outside no matter what I did to close off draft gaps. After adding the thatch, the temperature difference shot up to double digits the very first night. My amazement led me to learn something about U-value. – Bottom line – if you want to minimize heat loss, insulate the roof.

The thatch is draped on top and secured around the chimney post since I didn’t want to compromise the waterproof poly structure. I had to double layer the thatch because a single layer wasn’t adequate.  The natural palm (and not cheap) thatch will probably disintegrate sooner than I’d like, so I added thermal bubble foil insulation on the inside of the roof as a proactive measure. The insulation I used was Reflectix found at Lowes. Eggs are retrieved from outside through lift-up wood disk covers and push-in clear panels (shown below) so that eggs are visible and chickens can’t push out from inside. View out of a nest box. Handmade functional windows can be opened during summer. 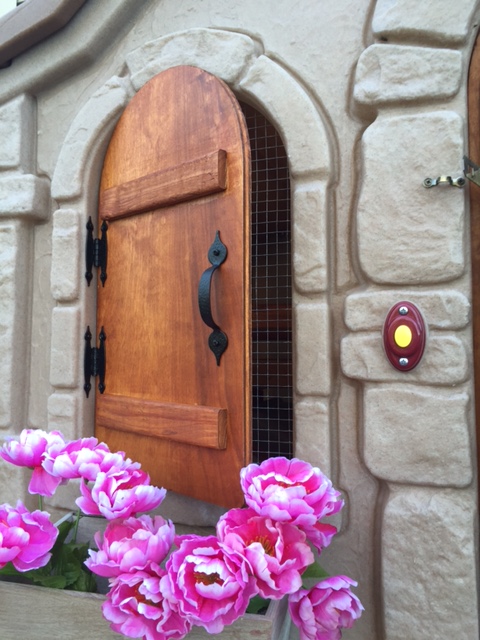 View from the inside, with hardware cloth. All other windows are paneled for the Winter but can be opened during summer. The poly panel of the playhouse glows from inside during daylight. Large door gaps are completely sealed off to minimize draft. Lexan panel is used for the door window. Chicken Door placement below to make the new coop work with the existing run. Added double layers of thick shammy panels for now (green panels shown on the third pic above). Once the chickens get more comfortable using the new door, I will be adding a clear dog door flap. I have an automatic chicken coop door that I’ve paid hundreds for, but stopped using it because it wasn’t reliable and my chickens kept getting stuck outside/inside. After over a year of keeping the door in manual half-closed mode on the wooden coop, I decided to not install it. Update 11/24/2015: The dog door flap made in clear vinyl gets pretty hard during freezing temperatures, so we’re back to shammy layers.

Vinyl flooring and ramp. The rungs are spaced 6″ on center. The left end of the ramp simply lifts up for easy removal. 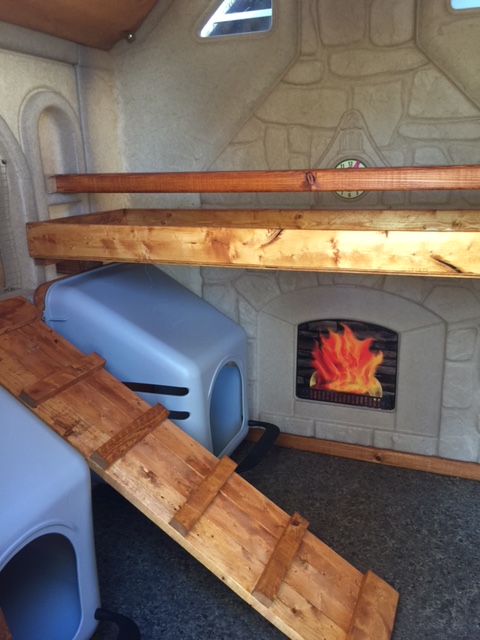 Built-in cleaning access opening. A tarp can be hung with clamps for easy sweep out of dirty shavings. Added a large dog kennel pan before adding wood shavings for easy slide out cleaning.
My girls are enjoying the new digs! I have 8 chickens and I believe the roost space is perfect. I spy them through my security camera recordings and they’re always evenly spaced out even through cold nights in teens degrees. Some may say that’s crowded for the given sqft but it all depends on how actively you maintain the space, and how much time the chickens actually stay in the coop vs. run / free-ranging (my girls only sleep and lay eggs in the coop). The girls use both nest boxes, although one that’s darker in the rear is much more popular. The unpopular nest box (towards the front) is used by the girls in lower pecking order. : )

I’d say 8 is the comfortable max, but it probably could accommodate 10 without issues given the roost space. I’m aware that many would disagree on this given the traditional sqft formula, but I know this for a fact since the girls had no problem even in a smaller coop for several years.

Thanks Gina for sharing your playful coop! The cottage theme – complete with a cozy fireplace make this coop a charming example of adapting an existing structure into an adorable – and safe -home for a backyard flock.

Cool Coops! – The Wicked Chicken Saloon, Mercantile and No Tell-Hotel!


Are those the little giant nesting boxes?


I just want to let you know that this design looks great. I’m not sure I’m I was up to building my own coop this looks totally doable. Maybe I won’t have to wait for another year to get my chickens.


This is certainly adorable and cost effective if you already have the playhouse! This might work well for an urban backyard coop (in a warm climate) if you already have a fenced in yard, but be aware if you are a new chicken keeper and live in a rural area with its many predators, this will not be safe enough for chickens. But be aware that if you live in a cold climate with snow, ice storms and frost, like I do in Michigan, the plastic will crack and break quickly in the sub zero temperature in winter. Hardware cloth on every opening and secure locking hardware is the only way to keep a chicken alive in rural America! The durability of exterior grade wood, shingles and hardware cloth is the ONLY way to go where I live. I’m not sure you could keep the humidity down enough in plastic either. Chickens can manage quite a bit of cold, but high humidity and not enough cross ventilation will cause comb frostbite overnight.


I love it that’s great, I also re-purposed a similar sized and shaped playhouse, but nowhere near as wonderful.

I attached an old sink cabinet to the playhouse’s back window that was supposed to be the nesting area but it gets used as nesting and a sleeping/ roosting area, I think that part of the problem is that I left 2″x4″ in the sink cabinet which they choose to roost on, but I’ve been preparing to move and raise/elevate it off the ground. You’ve given me some great ideas to adapt with the move and remodel of our makeshift coop. My neighbor advised me to place 1/4″ hardware cloth around all the openings as opposed to poultry netting, as raccoons will try to pull birds through the larger netting.


Amazing. Put this on Hometalk.com and thousands of people will get the benefit of seeing it. http://www.hometalk.com/10901553/our-100-diy-hand-built-debt-free-off-grid-shelter. Brilliant creative job you did.