Photos by author
Finally.  There are beginning to be a few more eggs in the nest boxes. The older hens are finishing up their molt—the new feathers are looking lovely, all strong and shiny.  I’ve been adding a bit of protein to their diets in the form of mealworms, and I think this may have speeded up the re-growth process.  I also supplement their layer feed with flax seed, and occasionally, meat scraps.  There are plenty of sources that recommend hardboiled or scrambled eggs for extra protein—but I feel it a bit odd to be buying eggs to feed to my hens so that they will start laying eggs again!
Experience from last winter, with these same older hens, has prepared me for only a few eggs from them until spring, but even a few of their big, hard-shelled beauties will be worth the wait. 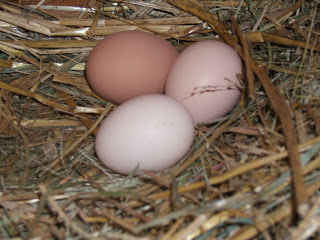 
Wow! An egg a day for a year and half! That’s wonderful. Chickens will eventually molt, because basically their feathers get old, and need to be replaced. Generally, it happens on an annual basis, and it’s the time that laying hens stop laying eggs and rest; it’s a healthy natural occurrence. I don’t know why yours haven’t molted yet—usually my chickens will go into their first molt when they are about a year and a half old, or after they have been laying about a year. I can’t help but think that they will, soon, but in the meantime, enjoy all those eggs!


My red sex-linked hens are two years old and have never moulted. Is this common? I’ve gotten an egg a day from each of them since they were six months old.


I only have 1 speckled sussex (hatched in May) and she’s not laying yet either! Named mine Dora because she is an explorer! Will hop up on the gazebo railing, climb all over the rocks around the goldfish pond, and generally dash about looking under every bush. She is very friendly and will allow me to pick her up. Very pretty bird and will hopefully live up to her reputation as an excellent layer.