The chicks we got in April have grown so fast.  This White Rock shown above started out as a fluffy little yellow chick.  The Silver Laced is growing into her look graciously.  They all graduated from the inside brooder and have been living outside for a few weeks now. They are separated from the older/bigger chickens by a fence.  After much thought, we decided this was best for all involved.

The older chickens had developed a bully in the flock.  We certainly did not want the pecking order to affect our young chicks. 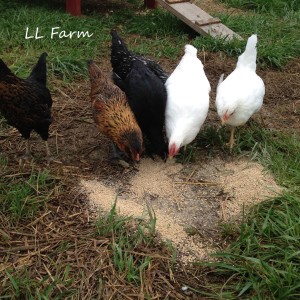 Also taking into consideration that the younger chicks are on a different food than the older flock, separation made sense.  Our older chickens are on a layer pellet and our younger chicks are on a grower/finisher food.  It is important that each bird eat the appropriate food for their stage in life.  We feed both sets kitchen scraps.  The older ones are accustomed to their ‘treats’ and come running when they see me.  The younger ones have not grown to appreciate the delicacy yet.

But, keeping the chickens separate created more work for us, in an already busy season on the homestead.  When deciding on the location for the younger chicks, I knew I wanted them close to the older flock.  Having them close in proximity makes feeding and watering easier for all of us.  For the new chicken run, we added to the existing fence that we already in place for the older flock.  Leaving the fence in the middle allows the new flock and the older flock to be neighbors.  They can get to know each other with the protection of a fence. I intentionally place their water containers near the dividing fence, to encourage curiosity about each other.  They can be quite entertaining to watch.

The decision to keep them separate also meant that Handy Hubby needed to build another coop for the young chicks to roost in at night. Starting with a pallet, he built the coop to those dimensions, with a slanted roof. Both coops are elevated off the ground, offering protection from the weather.  It allows them to stay outside, yet remain dry during the rain.  It also provides shade when the sun is extremely hot.  They create dust baths under the coop.

There is only one door on the smaller coop compared to the larger coop.  Also, there are no nesting boxes in the young chicken’s coop.  Our plan is to go through with flock rotation when the young chicks reach the age that they will be laying eggs.

I strongly believe that having the divider fence is the best solution for us having two sets of chickens at different ages.  With the ground work done on preparing the area for two sets of chickens, we hope to move forward with minimal work, adding new chicks every couple of years.


How long will you keep them separated?


I was wondering how Handy Hubby made that awesome chicken coop..


Handy Hubby is a carpenter, so unfortunately there are no plans.


Yesterday, I saw my first NICE red tomato in my garden. After supper, I went out to pick it. When I did, it collapsed in my hand. The otherside had a big hole in it and all the inside was eaten out. That is when I found that a chain link fence won’t keep baby chickens out of the garden.